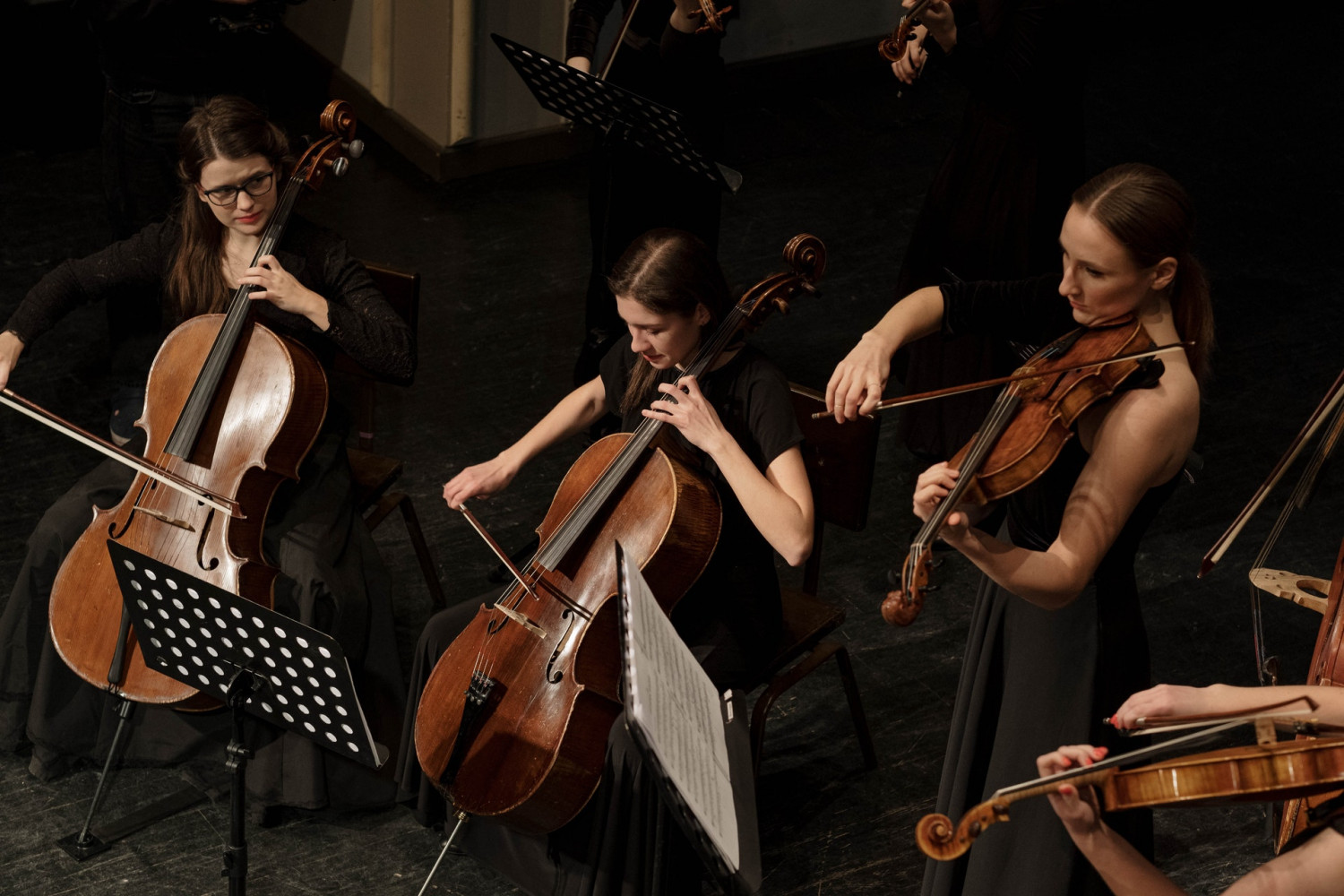 Members of the Eykamp String Quartet serve as principal string players of the Evansville Philharmonic Orchestral Corporation and as Artists in Residence at the University of Evansville. The Eykamp Family established the quartet and vision in 2002. This dynamic quartet provides classical music performances of artistic excellence and passion and is committed to ensuring that both chamber and orchestral music are a vital part of our community and beyond. The Eykamp String Quartet is made possible by the special underwriting of Rita, Richard and Dorothy Eykamp, friends of the University of Evansville and the Evansville Philharmonic Orchestra.

Though described as "a small young woman", violinist Jia-Rong Gan was praised for having a "sound and command of her instrument that belied her physical stature" (Classical Voice of North Carolina). A native of Malaysia, Jia-Rong began her violin studies at the age of five and has since captivated audiences across the United States, Europe, and Asia.

Jia-Rong's passion for music does not conclude with her orchestral performance. A devoted chamber musician, Jia-Rong has held resident string quartet positions at various universities and since 2018, she has been the Artist-In-Residence at University of Evansville with Eykamp String Quartet. Using chamber music as a platform for cultural diversity, Jia-Rong founded Stephenson|Gan violin and piano duo in 2016 with the goal to promote diversity and equality on the concert stage. This award-winning duo has since performed at stages all around the USA including Carnegie Weill Recital Hall.

Born and raised in Minnesota, Michael Chu is both an active performer and music educator. Coming from a diverse musical education including violin, piano, trumpet, and saxophone, Michael enjoys drawing inspiration from many different influences and cultures. He actively seeks to expand his knowledge and understanding of both historical and contemporary styles, respecting traditions while embracing new directions. Michael is a graduate of the University of Minnesota - Twin Cities, where he received his B.M. in Violin Performance and Music Education as a student of Sally O'Reilly. He later went on to receive his M.M. in Violin Performance from the San Francisco Conservatory of Music as a student of Chen Zhao. Other influential teachers have included Catherine Van Hoesen, Aaron Janse, and Blayne Barnes.

Mark Hatlestad is a violist and Minnesota native. Mark is an avid performer, music educator, and advocate for contemporary music. He has appeared in festivals across the globe, including the Sommerakadamie Leutkirch in Germany, the Keshet Eilon Summer Master Course in Israel, as well as the Chautaqua Summer Music Festival in New York. Mark completed his undergraduate and graduate studies at the Jacobs School of Music in Bloomington, where he studied viola performance with Atar Arad and Edward Gazouleas. During his time in Bloomington, Mark worked closely with Steve Wyrczynski, Peter Stumpf, Kevork Mardirossian, Mark Kaplan, Stanley Ritchie and members of the Pacifica Quartet. Believing in the importance of contemporary music, Mark collaborated with several student composers at IU, and served as principal viola for the IU New Music Ensemble under Dr. David Dzubay. In addition to performing, Mark studied string pedagogy with Mimi Zweig and Dr. Brenda Brenner, and worked as an assistant teacher for the IU Summer String Academy and the Fairview Violin Project, a program that gives free violin lessons to underprivileged elementary-school students. Other important teachers and mentors include Roland Glassl, Aaron Janse, and the Artaria String Quartet.

Mark has been a member of the Evansville Philharmonic since 2014, and is excited to have the opportunity to greater serve the Tri-State Area.

Graham Cullen is currently the cellist of the Eykamp String Quartet as well as the Principal cellist of both Evansville Philharmonic and Owensboro Symphony Orchestras. Graham holds a BM and an MM from the Jacobs School of Music at Indiana University. During his time at the Jacobs School, Graham was a member of the student quartet in residence, allowing him to work closely and collaborate with the Pacifica Quartet and other faculty members.

Before coming to Evansville, Graham held the Assistant Principal chair with the Columbus Indiana Philharmonic. He was also a member of the Richmond Symphony Orchestra and the Terre Haute Symphony Orchestra. Graham was invited numerous summers to be a fellow at both Aspen Music Festival and Tanglewood Music Center where he performed alongside cellists Yo-Yo Ma and Alisa Weilerstein. Graham was a grand prizewinner of the Alice Coleman Chamber Competition and has had the opportunity to perform all over the US and Europe with his quartet.